With respect to Islam, Russia’s second largest religion, an estimated 19.6 million Muslims live within Russia (CIA World Factbook – 2009 Population Data). Most indiginous Muslims reside either in the Volga-Ural region (Tatar and Bashkir peoples) or in the North Caucasus between the Black Sea and the Caspian Sea (Adyghe, Balkar, Chechen, Circassian, Ingush, Kabardin, Karachay, and Dagestani). Another population of Muslims consist of migrants from former Soviet states (Azeri, Kazakh, Uzbek, Tajik and Kyrgyz). The majority of immigrant Muslims live in Moscow, St. Petersburg and larger cities of Western Siberia. Most Muslims in Russia belong to the Sunni branch of Islam, roughly 10% are Shia (mostly Azeri immigrants), while Chechans adhere to a tradition of Sunni Sufism.

So how many Orthodox Christians and Muslims are adherent followers of their respective religions? The truth is, seven decades of religious suppression during Soviet rule has significantly reduced the number of devout worshipers in both Muslim and Christian communities. According to Roman Silantyev, a Russian Islamologist, there are between 7 and 9 million people who practice Islam in Russia (The Muslim Observer 2008), while the rest are only Muslims by ethnicity. According to The Center of Sociological Research, Lomonosov Moscow State University (June 1996), results of survey data determined that just 7.1% of adults attend church monthly, a mere 3.9% on a weekly basis. This in a country where over 60% of the populace has identified itself as Russian Orthodox Christian. 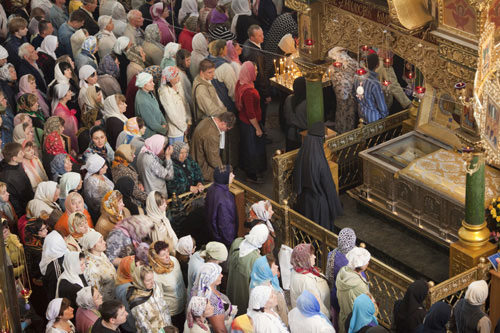