Russian holidays (and Ukrainian holidays) have come from a wide variety origins. The oldest festivals have their roots in both pagan tradition and Eastern Orthodox religion. More recent holidays had their start during the period of the Soviet Union. The newest holidays (with the least amount of tradition) were created following the breakup of the USSR and the founding of new, independent nations.

Below we’ve outlined some of the more traditional holidays, festivals and celebrations found throughout Russia, Ukraine and former Soviet states. While traditions vary slightly country to country, each of the holidays listed is still recognized (officially or unofficially) in each nation.

The New Year celebration is unquestionably the most popular holiday in Russia, Ukraine and Belarus. Simply put, New Year’s festivities in Russia are very much like combining both Christmas and New Year of Western nations.

Like in the West, families decorate a fir tree (yolka – ёлка), present one another with gifts, and gather around the table on December 31 for a festive, bountiful dinner. There is even Father Frost (Ded Moroz – Дедь Мороз) who comes at night to leave children presents.

The New Year’s side of the celebration kicks in at 12:00 am on January 1, when champagne corks are popped, good wishes are given and fireworks are released to ring in a New Year.

Some Russians and Ukrainians also celebrate the New Year according to the old (Julian) calendar on January 14. While it can also be brought in with food and drink, it is a much more subdued celebration than January 1st.

Orthodox Christmas, in accordance with the old (Julian) calendar, is celebrated in Russia and Ukraine on January 7. For some it is a sacred Christian holiday, but like in the West, celebrations are also rooted in old pagan festivities of the winter solstice. For many, Orthodox Christmas is one last chance for carousing and merrymaking – more food and drink, festive carols, well wishes for health and prosperity, as well as a tradition not commonly associated with Christmas – fortune telling. 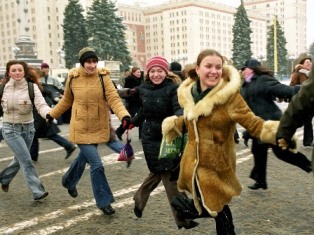 St. Tatyana’s Day is a day when student’s celebrate the end of the winter term. After winter exams are complete, on January 25, students release from the stress and anxieties of the academic year. They do what comes naturally – they party.

Historically January 25, 1755 is the day that Empress Elisabeth Petrovna endorsed a petition to establish Moscow State University (in honor of her mother Tatyana Petrovna). Not coincidently, this historic date also fell on the religious day of Saint Tatyana the Martyr.

Maslenitsa (Pancake Week) falls on the final week before Lent (sometime in February or early March). It is a celebration of sunlight and the coming of spring.

Traditionally Maslenitsa was celebrated carnival style which included horse racing, fistfights and pancakes or blini. Today, the horse racing and fistfights are not so common, but the tradition of eating pancakes served with honey, caviar, fresh cream and butter is still very much prevalent.

St. Valentine’s Day is a relatively new holiday that was inherited from the West. As in America and elsewhere, Valentine’s Day falls on February 14 and is celebrated with the traditional exchange of “I love you”, flowers, romantic dinners and small gifts. 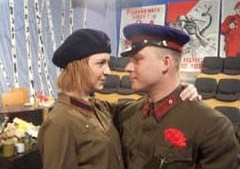 Today the day celebrates all men, young and old, since all are past, present or future Defenders of the Fatherland. Russia still observes the day as an official holiday, while its an unofficial holiday in Ukraine and Belarus. 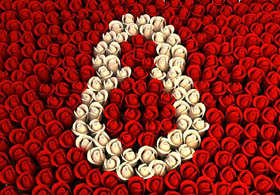 March 8 marks International Women’s Day. An official holiday in Russia, Ukraine and Belarus, the day is a sort of blend between Western Mother’s Day and Valentine’s Day. It’s like Mother’s Day, except every female is recognized – mothers, daughters, nieces, sisters, girl friends. Like Valentine’s Day, men should present women with kind words of affection, small gifts and flowers. Men who really want to score points will also assume their spouses duties for the day – cooking, cleaning, washing, child rearing, etc. 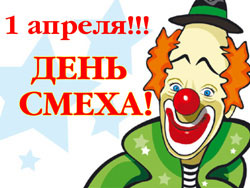 The Day of Laughter has the exact same connotation as April Fool’s Day in the West. It also falls on the same day, April 1. Its a joyous day when people try to get the best of one another through trickery and jokes. Everyone participates including newspapers and TV broadcasts, but no place better than in the Humor Capital of the former Soviet Union, Odessa. The city plays host to the “Yumorina” comedy festival which includes a parade and many light hearted exhibitions – drawing thousands of visitors annually. 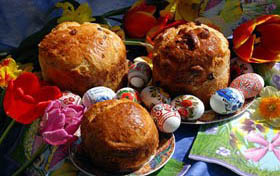 Orthodox Easter, also known as Paskha (Пасха), takes place in springtime, usually April or early May (see oremus.org for dates). Observed by all Eastern Orthodox, Easter is an official holiday only in Ukraine – its an unofficial holiday in Russia and Belarus.

Eastern Orthodox churches mark the event with a midnight service on Easter Sunday. After the service, Easter baskets are blessed. This signifies the end of the Great Lent, a forty day fast which culminates into a “great” feast.

Symbolic foods of Easter include include the painted Easter egg (pysanka), Easter bread (kulich), and a traditional Easter dish made of tvorog, suitably named “Paskha”.

The traditional greeting on Easter Sunday is:
“Khrystos Voskres!” (Christ has risen!)
The answer in return is:
“Voyistinu Voskres!” (Truly has risen!)
You’ll participate in this greeting a lot if you will be in Russia, Ukraine or Belarus on Easter. 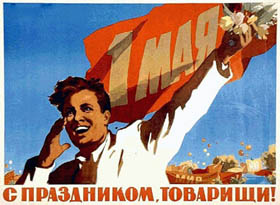 Spring and Labour Day is an official holiday in Russia, Ukraine and Belarus. Also called May Day or the International Day of Solidarity for Workers (in Soviet times), the holiday falls on May 1 (May 1st and 2nd in Ukraine). While the day was originally marked with parades and demonstrations by the “Solidarity of Workers”, it has largely lost its ideological significance. Today it marks the beginning of a new spring. Its simply a day (two days in Ukraine) to rest and relax with friends and family.

May 9 is an official holiday in Russia, Ukraine and Belarus. Falling on the historical date of Nazis Germany’s surrender in 1945, Victory Day is a somber day to commemorate the immense sacrifice of Soviet men and women during the Great Patriotic War (1941 to 1945). It is believed that over 20 million Soviet soldiers and civilians lost their lives in the war, a price largely overlooked in the West, but never forgotten in former Soviet nations.

Every city has an “Eternal Flame” to pay tribute to those who perished. On Victory Day citizens gather to lay flowers in remembrance. Military processions and salutes are also common, particularly in larger cities.

Troitsa or Holy Trinity Day is observed in Russia, Ukraine and Belarus, although only Ukraine recognizes it as an official holiday. Celebrated in summer (roughly June or July), Troitsa falls on a Sunday 50 days after Easter (see oremus.org for correct dates).

People mark the day by visiting the graves of loved ones who have passed away. While not really linked to Christianity, food is eaten and vodka is consumed and also left on the tomb of the deceased. It’s considered a good omen to find that the food and drink is gone upon your next visit to the cemetery.

Ivan Kupala is an old pagan fertility right that was accepted into the Orthodox Christian calendar. Related to the summer solstice when nights are the shortest, festivities take place the night of July 6th/7th (new calendar).

Enthusiastically celebrated by youth, the holiday is marked with water fights (connected to water’s role in fertility and ritual purification), jumping over bonfires (fire signifying the burning of illness and evil forces) and unwed women floating flower wreaths. “Village folk” also venture into the forest at midnight in search of the elusive, magical fern flower. 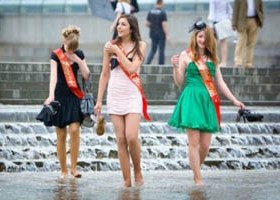 While different schools, institutes and universities have their own Graduation Day, most fall in the later half of June – last Friday of June is quite popular. There are Graduation Ceremonies – in which graduates receive their diplomas. Graduation Balls – in which everyone dresses formally (girls in beautiful dresses). In addition there are frequent post ceremony celebrations in which graduates can be seen singing, dancing and rejoicing. One favorite spot, which has become somewhat of a tradition, is in the public fountain. 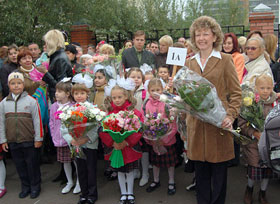 Day of Knowledge falls on September 1. It is a “joyous” day that marks the beginning of the school year. Children dress in their best new school outfits, girls with their hair in bows, all carrying flowers to present to their teachers.