Every culture has its unique etiquette and customs. For the most part (with slight variations from country to country – region to region), Russia, Ukraine and other post-Soviet nations all share similar “rules” of social behavior. First time visitors to Russia and Ukraine are often pleasantly surprised, sometimes confused, and in certain cases, taken back by the peculiarities of Russian etiquette. To minimize the culture shock for first time visitors, we’ve outlined some of the more prevalent conventions of social behavior found in Russia, Ukraine and former Soviet states. 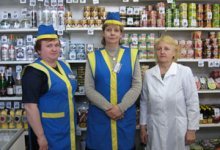 The first impression of many foreigners, particularly those visiting large cities, is an environment void of emotion. Strangers seldom greet one another on the street, cashiers rarely engage in “small talk” and a simple smile is sometimes difficult to find. At first glance Russians seem unfriendly, somewhat “cold” in nature.While its true that Russians are very restrained in public, the characterization of an “unfriendly” nationality is quite undeserved. Once you form a friendship with a Russian, or group of Russians, you will quickly change your opinion about Russian character. 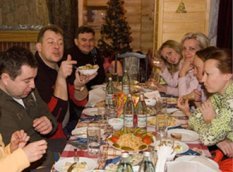 The contrast between the “warmth” and hospitality of Russian homes versus the restrained, sometimes “cold” nature on the streets, is like night and day. It is a contrast you can sense both physically and emotionally. Walk down a typical Russian street and what do you see? Most of the time its grey, square, Soviet constructed buildings void of emotion. Its kind of depressing. Enter an apartment building and and walk up a few flights of stairs. It is still the same – grey, dark and kind of depressing. Now walk through the doorway of a flat and enter into a Russian home. Wham – suddenly you are hit with warmth and color and tidiness that is nonexistent on the other side of the doorway. Any visitor who has formed a friendship with Russians and/or Ukrainians can attest to this experience. The warmth and generosity of Russian homes, both physical and emotional, is quite incredible. 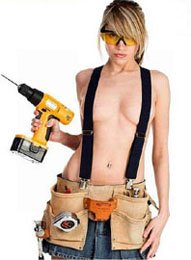 Gender roles in Russia and Ukraine tend to be much more traditional than they are in the West. In general, men should be strong and assertive while women should be smart and beautiful. Accordingly, Russian women tend to dress much more femininely (as to accentuate their beauty) and men still adhere to traditional male etiquette. For guys visiting Russia (particularly for guys who will be courting a female), here are a few good manners to remember.

Traditional gender roles in the Russian home are also still quite common. Women typically cook and clean, men take care of repairs and maintenance. Although this isn’t a great revelation (this is still customary for most cultures around the world), some feminists from the West may object to a certain degree of “inequality”. A point that may appease such feminists, is the fact that this gender gap is much less prevalent in younger generations. Observe a twenty-something Russian couple today, versus a couple of the “baby boomer” generation and its quite apparent that the male is now taking on more responsibility in the kitchen, with the children, and (on occasion), even with the cleaning. 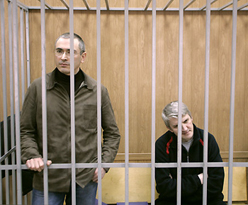 For most Russians and Ukrainians, rules are meant to be broken. At an early age school children develop innovative means to pass exams – using notes when notes are prohibited, “cooperating” with classmates when teachers exit the room. While such forms of cheating are frowned upon in the West, rule breakers in Russian schools are largely ignored.

In business, black market and bribes (which were refined during Soviet times), are still key components of commerce. Rules are meant to be bent and circumvented, right from the wealthiest Russian oligarchs who made fortunes in fraudulent loans-for-shares auctions of the early 1990s, to the little businessman who avoids expensive state fees via less expensive “gifts”. This is, without a doubt, the biggest barrier to foreign business in Russia. Without a trusted local partner, many Westerns struggle to figure out all the nuances of the Russian system.

If you are not working in a school or in business, then your biggest exposure to Russians’ disregard for rules will definitely be on the streets. Russian and Ukrainian drivers are chronic offenders of traffic rules. Speed limits have little significance and red lights are frequently ignored. One should take extreme caution while crossing the street, as most drivers are oblivious to crosswalks and have complete disregard for pedestrian traffic. And while its often fun to make light of Russian driving habits, its really no joke. The single biggest health hazard when traveling to Russia is the risk of traffic and/or pedestrian accidents.